[Edited later: If you can’t tell by the relatively high number of comments on this post, I got featured in the Freshly Pressed section of the WordPress homepage and I’m rather proud to say I received about 7,000 hits over about two days.

One of the great parts about that was all the feedback I got about this post, including one comment from Robin Esrock from Word Travels, who promoted my post on his Facebook page and Twitter. Check out his comment below, where he says travel writing isn’t always the dream job people think it is, and you’ll also find a link to his site.

After reading all the comments, I just want to add that, realistically, being a travel writer probably isn’t all it’s cracked up to be. You’re always on the road, it’s a lot of hard work coordinating with different people in different countries all the time, and sometimes the locations are pretty remote. Even so, I’d probably choose that over data entry.]

If I were to rank the best jobs in the world, it would probably go something like this: Ian Somerhalder’s personal masseuse, roller coaster tester and then travel writer (or TV host). But until I can make all, or any one, of these a reality, I will have to be satisfied with reruns of The Vampire Diaries, trips to amusement parks and watching luckier bastards than me travel the world for the living. And in the meantime, I’ll watch my three favourite travel shows for pointers while I boil with envy. 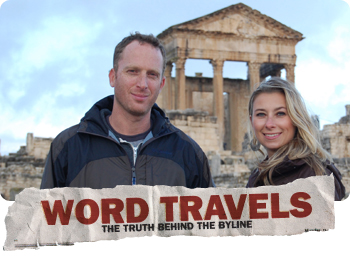 This is a Canadian show that follows two travel writers as they, well, travel and write. It’s an interesting take on the traditional travel show, as it’s just as much about their personal experiences looking for stories and piecing together columns and articles as it is about the places they visit. Plus, having one writer – Robin – focus on the extreme side of traveling (like snowboarding down sand dunes in Dubai) and having another – Julia – write about the quirky, cultural side of travel (like training to be a gladiator in Rome) makes for a great diversity of content.

I also like reading about how the hosts of travel shows got those jobs. Robin, who’s based in Vancouver, used to work in music and marketing, but after being struck down by a car while on his bike he got a sweet $20,000 settlement and decided to run off and travel the world for a year. He wrote a column and a travel blog about it, and the rest is history. Julia, meanwhile, started her career writing a movie column for the Toronto Star at the age of 12 (yes, 12!) and after six years transitioned to travel writing. Someone needs to explain to me how she managed to get that gig. 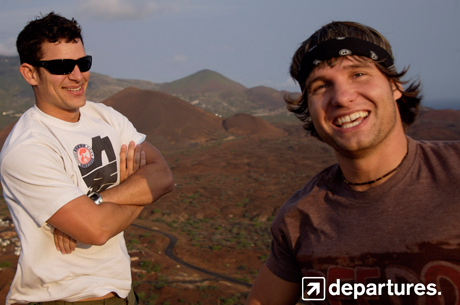 Another Canadian production, Departures was initially supposed to follow two friends – Scott and Justin – as they leave their regular lives behind and travel around the world for a year. Luckily for them, the show was successful enough to extend their travels and they’re currently in their third season. The best part of this show is that neither of the hosts are experts in any sense of the word. At the risk of sounding patronizing, Scott and Justin are regular guys who interact with the places and people they meet from the same inquisitive perspective as their audience. Plus, they tend to shy away from the touristy, Travel + Leisure side of travel and stick to the less beaten paths. They even spent a whole episode on Ascension Island, a tiny island in the middle of the South Atlantic that hardly anyone has heard of. (Plus, they’re really cute.)

The show’s website doesn’t fully explain how the guys managed to secure this gig, but Scott has a film background (he met the camera dude Andre while in film school) and when they came up with the idea for Departures, he called up his old high school friend Justin and a show was born! 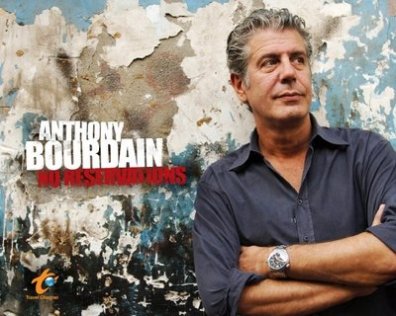 This American show highlights one of the best – if not the best – parts of traveling: food. Not only is food one of the foremost expressions of a culture, but it’s also something everyone can enjoy and it differs in very interesting and revealing ways from one place to another. The great part about this particular show is that Anthony brings an enormously likable persona and infectious love for food to every dish and beachside tavern. He’s also a bit grumpy and has a bit of disdain for vegetarians, but that’s all part of the charm. His knowledge of food and international travel makes him a hugely entertaining guide.

Anthony has a culinary background and jump started his life as a famous writer and television personality by writing about his life working in restaurants “good, bad and horrible” in his book Kitchen Confidential. He later combined travel and food in A Cook’s Tour and now he has his own awesome show.