By some random or divine coincidence, I ended up watching both Anvil: The Story of Anvil and Man on Wire tonight, in between which I also watched J.K. Rowling’s 2008 commencement address at Harvard University on TED.com. The coincidence? Besides all of these things being generally awesome, they each also had a “follow your dream” message to rub in my cynical face.

Anvil: The Story of Anvil

Anvil is a Canadian heavy metal band that rocked with Bono in the early ’80s, but lost momentum shortly after. During the filming of the documentary, they were struggling to keep going in between family life and ‘real’ jobs. (You can read a great review of it here.) The point is, they never reached the fame or success of The Rolling Stones, but they’ve matched their longevity. And they aren’t too proud to mail out demo tapes, borrow money to put out a 13th album, or to play to a crowd of 5 headbangers.

Meanwhile, Philippe Petit is sneaking into the World Trade Center to walk along a tightrope over 1,300 ft. in the air. (Proper review here.) If you’ve seen this documentary, you will understand why I love his energy, and his enthusiasm. I think of this quotation from On the Road, by Jack Kerouac, when I listen to Petit talk about his motivation:

“The only people for me are the mad ones. The ones who are mad to live, mad to talk, mad to be saved, desirous of everything at the same time. The ones who never yawn or say a commonplace thing, but burn, burn, burn, like fabulous yellow roman candles exploding like spiders across the stars and in the middle you see the blue centerlight pop and everybody goes, ‘Awww!'”

When Petit talks about his approach to life, that it should be lived on the edge, moving and creating each day like a work of art, it makes you want to do the same – to move, and move, and move towards something, anything – to fix your eyes on something and reach.

Petit describes the moment he heard about the twin towers being built, and the birth of his dream to walk between them: “Now I have acquired my dream. Usually, when you have a dream, the object of your dream is tangible, it’s there, it’s quixotic, but it’s there, nagging you, confronting you, but the object of my dream doesn’t exist yet.”

He then waited until the towers were built, planned for months, snuck in and danced up there for almost an hour. You have to respect that commitment. That alone – the certainty and conviction, that clarity of purpose – is something to envy. The fact that he succeeded (and didn’t fall to an untimely death) almost seems secondary. 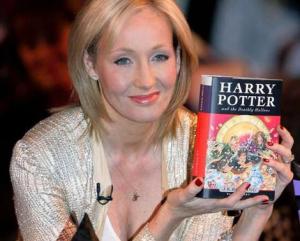 And on that note, you can also listen to  J.K. Rowling give her take on failure and success to hundreds of Harvard graduates and their beaming parents. While her whole speech is worth a listen, what she said about failure was of particular interest to me. If you’re not already aware, the British author of Harry Potter fame was broke and nearly destitute when she wrote the first book and, obviously, has since been rather successful. Here, however, she talks about her lowest point after a failed marriage and having no job:

“The fears that my parents had had for me, and that I had had for myself, had both come to pass. And by every usual standard, I was the biggest failure I knew.”

“Had I really succeeded at anything else, I may never have had found the determination to succeed in the one arena where I believed I truly belonged. I was set free, because my greatest fear had been realized and I was still alive.”

“And so rock bottom became the solid foundation on which I rebuilt my life.”

I can’t help but find inspiration and a bit of solace in believing that there is an upside to failure, a “stripping away” of oneself, as she put it, that lets you figure out who you really are, that let’s you find your purpose.

Rowling also adds, “There is an expiry date on blaming your parents for steering you in the wrong direction.” An excellent lesson for the kids, I think. At some point, you will have no one to blame but yourself for not getting where you want to go.

In short, I’m feeling rather encouraged and optimistic about things now. But if you still need some convincing, this ought to do it.

“We fight terrorism not only by dropping bombs, but also by building schools.”

I just want to share this blog post on Sen. Clinton’s speech on development. I like the highlights of the speech that Kristof chooses, especially about emphasizing investment over aid.

I somehow didn’t find the time to share my thoughts on this before Christmas, but better late than never. Usually around that time of the year, I would gripe about how I don’t celebrate Christmas and how it gets shoved down my throat from every angle for weeks and weeks leading up to Dec. 25. This year, however, what really bothered me was the griping coming from everyone else about the PCness of the expression “happy holidays.”

This is the wrong way to think about using the expression “happy holidays”: It’s a politically-correct euphemism for “Merry Christmas” that we’re forced to say regardless of the context because we have to be sensitive to those who don’t celebrate the birth of Santa Jesus.

And here is the good way of thinking about using the expression “happy holidays”: In corporate or just generally broad settings, saying “happy holidays” means that you understand that there are other holidays being celebrated at this time of the year other than Christmas. In every other case, just say “Merry Christmas” if that’s what you really mean.

The best photos in the universe

I shared this on Facebook as soon as I saw it because it just has to be shared. I almost couldn’t decide which one would be my new desktop wallpaper – #3 Eternally Stargazing won, eventually.

Let’s all thank Twitter for alerting me to this story. Apparently, people are very upset that H&M and Wal-Mart destroy and throw out unsold clothing (both chains deny that this is their policy and have said they’re going to investigate why this was happening in their NYC stores). I love hearing stories like this because bad deeds deserve bad press, and bad press (hopefully) leads to reparations.

Mirror, mirror on the wall… how environmentally responsible am I?

I love and want this ridiculous mirror. Guilt is the best motivator.

Because I also love bargains

I’m going to post this one on my bulletin board. Full price is for suckers.

Everyone’s a critic around awards season

Instead of sharing my own bloated predications, consider these lists as my own. (When it’s time for the Oscar Poll, EW writes my ballot after all.)

Even so, I will share my five best favourite movies for the year. (And I’ve seen A LOT of movies this year, so I actually feel informed enough to choose favourites, for once.)

Okay, well, I haven’t seen Fantastic Mr. Fox, and I think if I had, it’d probably make my list, but here it is anyway.

Oh, and my New Year’s resolution is just to follow through on the goals I set out for myself on Labour Day. Just so you’re up-to-date.