Imagine you’re sitting in a movie theatre waiting to see the latest Spider-Man reboot. It goes: popcorn, previews, teenagers throwing gummi bears at your head, more previews, opening credits… wait, what’s this? Who’s that black guy? Is that… could that be Peter Parker? What the hell? That doesn’t make any sense! Peter Parker is WHITE, godammit.

Okay, I know your mind has just been blown to bits by this radical interpretation of a fictional character, but please consider this: what does Peter Parker’s ethnicity or skin colour change? When you think about his backstory, his family life, his love for the redheaded girl-next-door, or the story of his transformation from geeky high school kid to badass superhero, does his skin colour actually matter in any of that? Would he not have taken up photography? Would he not have blamed himself for the death of his uncle? Would he not have recognized that with great power comes great responsibility? No. The answer is no. If we changed his hair colour to blonde, would that be blasphemous? What about his eye colour? Again, the answer is no. None of that matters to who the character actually is or the story, so why can’t we change it? 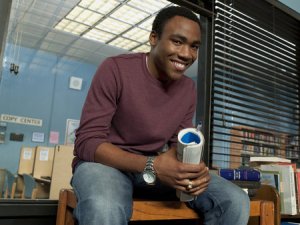 It seems pretty clear cut to me, but there are plenty of people getting all in a huff about the Twitter campaign (and Facebook group) to cast African-American actor Donald Glover as the next Spider-Man. While it seems like most people have hopped onto the bandwagon, some have insisted that it would be untrue to a classic and beloved character. In fact, in a recent interview Stan Lee (the comic god behind Spider-Man) said that it would be “confusing” to have a black actor play Spider-Man. And a few other comments I read about the idea also used that word: confusing.

If you think it’s important to stay true to the original incarnation of an iconic character, remember a couple of things. In the recent rebooted Battlestar Galactica series, two characters were changed from man > woman and from black > Asian without disrupting the precious sanctity of the original show. And in the Iron Man movies, as well as the upcoming The Avengers movie, Nick Fury is a white character played by Samuel L. Jackson. [Edited later: Take a look at the comments section below, where it’s pointed out that there actually is a black Nick Fury in the comics.] So, really, does the change hurt the movie? Frankly, if we have to put up with the unending barrage of remakes being spit out en masse by Hollywood, we should at least let directors and producers mix things up a little. If you don’t have any changes to make, or anything new to add to something, then don’t bother. And changing the ethnicity of Peter Parker? That’s something new, at least.

Of course, there is a dark side to casting an actor who doesn’t match the ethnicity of a character. Jake Gyllenhaal recently played the titular role in Prince of Persia without being Persian. And there has been a bit of backlash against M. Night Shyamalan for casting mainly white actors in Asian roles in the upcoming The Last Airbender. [Edited later: I’m having a hard time figuring out the ethnicity of the actors from this movie, aside from that guy from Twilight and Dev Patel. I assume that information must be out there, though, if people are upset that they’re “white”. If you can throw me an informative bone here, that would be great. Also, if you’ve watched the original Avatar: The Last Airbender, can you pinpoint for me exactly what the ethnicities of the characters are supposed to be? They don’t explicitly say, do they? They’re just “fire nation” etc. Based on what I know so far, it sounds like when M. Night says he saw the characters as ambiguously mixed, I gotta’ believe him. And that Noah Ringer’s gotta’ have some Asian in him.]

Personally, I have to admit it’s sad to see a white A-list actor play a character that could have been played by a minority; frankly, it seems like a missed opportunity to be more inclusive. But, at the same time, is that a double-standard? If Peter Parker can be played by a black actor, why can’t Prince Dastan be played by a part-Swedish, part-Ashkenazi Jewish actor? (Yeah, I IMDB’ed that.) Are we more comfortable with non-white actors playing traditionally white roles than the other way around? Is this a “give the minority” a chance issue? Are we just tired of seeing white actors getting all the roles? (And, let’s be honest, 99% of all the characters based on old movies, T.V. shows and comic books are white, so where does that leave everyone else when all Hollywood wants to make are reboots?)

So, on the one hand, we want to be able to open up roles to people of various ethnicities without insisting that traditionally white characters be played by white actors, and on the other hand, when we do come across a non-white character, the audience seems to want to stay true to the ethnic makeup of that character and movie execs just want to cast a tan Jake Gyllenhaal.

And, of course, there’s some grey area. In 1982, Ben Kingsley, who is half-Indian and half-English, played Mahatma Gandhi. Was that okay? Is he supposed to be 100% Indian? What about people who are 1/6 this, and 1/6 that? Who are they “allowed” to play? What about comedians who portray Barack Obama? Should they technically be half-black and half-white? When you start nitpicking about the ethnicity or skin colour of actors matching the genetic makeup of the characters, or people, they’re playing, you may end up playing a game of “trace the DNA” as more and more people have mixed backgrounds anyway.

I guess in a perfect world, there would be a diverse array of characters to play, accompanied by an equally diverse array of good actors to play them and no one would have to consciously try to a) mix it up a bit so it’s not all white out there and b) ensure that characters of a particular ethnicity get portrayed by actors of that particular ethnicity. But since it’s not a perfect world, what ethics dictate who should be cast in which roles? And who’s deciding?