Just incase you don’t feel like reading this entire post, let me begin with my conclusion (which is my very common go-to conclusion for almost every issue): everyone’s both right and wrong.

I happened across this YouTube video a few days ago, by *ahem* accident, which is the first in a trilogy of “fat rants” by an American writer/actor/filmmaker/model named Joy Nash. I guess you’d have to call her a YouTube celebrity at this point, since her first fat rant video has over 1.5 million hits – I’d say 1 million is the benchmark, no?

Her plus-sized diatribe attacks our image-obsessed society and its war on fat people – a war where the victims (larger folks) are the objects of mental and emotional violence to the point where they (we) feel that they (we) actually deserve it. Being “fat” has become so synonymous with “bad”, she argues, that it’s natural to feel embarrassed in a fitting room, to believe that you’d be prettier if you could just lose some weight, and to assume that so-and-so would only ever ask you on a date if you were thin (whatever that means). Nash advocates for plus-sized people (especially the ladies) to stop hating their bodies and to not just accept how they (we) look, but to be proud.

Okay, she has some valid points. I agree that there’s a lot of bad mojo out there against fat people. Snide jokes about the assumed and socially accepted undesirability of “fat chicks” aren’t helping anyone. Images that assume thinner is better wreak havoc on the majority of the population’s views of how their bodies should look. And I can’t begin to express the bitterness that’s associated with trying to shop in a store that doesn’t carry anything close to your size. Basically, when you start slurring the words “fat and ugly” so that you’re now saying “fat’n’ugly” like it’s the same thing, there’s a problem. The shame, the embarrassment and the self-hate that are the product of how we view “fat” people definitely need to go.

That being said, I can’t swallow everything Nash is saying. She claims that she’s not advocating for people to start eating everything in sight, neglect exercise and get as fat as they can.  She says she’s a firm believer in healthy eating and an active lifestyle. I, unfortunately, have to suggest that she may not be an expert in what exactly is a healthy weight, a healthy diet or a healthy active lifestyle.

You can’t deny that there is such a thing as “too fat.” Too much excess fat stored in your body is bound to have negative implications for your health. Watch one episode of some daytime talk show where they pull a guy out of his house with the Jaws of Life, and you’d be hard-pressed to believe otherwise. And I could discuss some study about couch potatoes, or rising obesity levels, but we’ve heard them all before. So, I guess the question becomes: how fat is too fat? What’s unhealthy obesity, and what’s “plump,” “full-sized” or “curvy”? And, in this case, are we sure Joy Nash knows the answer?

I know a lot of us would pull out the ole’ BMI index to determine how fat is too fat, but there are plenty of reasons why we can’t rely on it to make those calls for us. Frankly, I think it’s up to each individual (and their family or doctor) to determine if we’re getting into unhealthy territory. There are too many factors to consider that are unique to each person – genes, body type, thyroid problems, etc. etc. Obviously, one person’s idea of a “healthy weight” cannot be applied to everyone.

Nash says she “eats healthy” and exercises “about two times” per week. According to her, that makes her healthy. That’s fine for her, but she’s given me no reason to accept her standard as the final word on what’s enough, what’s healthy, or what’s “too fat.”

Having said that, now I’m worried I’m going to get categorized with people like this (which is a response to a different fat rant, by the way). For a more balanced discussion than that, watch this video:

Meanwhile, remember when the blogosphere was in an uproar over the apparent controversy surrounding designers not wanting to dress Precious star Gabby Sidibe for the Oscars? I remember reading a post that called her “full-sized” and I recall the word “euphemism” popping into my head. (By the way, I hate using Gabby as an example, as I’m sure she’s been used as a launching point for similar debates ad nauseum, but I think it proves my point.) 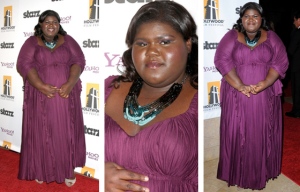 Does it concern anyone else that Gabby’s body type is being promoted as “curvy”? Isn’t it possible that she falls into the category of “too fat”? I’m not saying she should be stoned in the streets, but I don’t like the idea of people being taught (and yes, that is what’s happening here) that this level of obesity is okay. I don’t think Gabby should be ridiculed, or criticized, or pitied, or even encouraged to lose weight by anyone other than her own fully functional brain, but it would be irresponsible to actively support this body type. Public figures necessarily end up representing issues like weight loss (and adultery etc.), and when we put a positive label on this body type,  just like when we idealize unrealistically thin models on billboards, we just end up reinforcing unhealthy standards.

So isn’t there some middle-ground we could be occupying? I feel like one camp thinks overweight people are the scum of the Earth, and the other camp refuses to accept that we have a problem with weight at all. I think, ideally, the images and messages we receive from the media would be a little more balanced than that.

On a more personal note, I would appreciate it if my rude uncle stopped recommending that I take a brisk walk each evening, as if my issues with weight could be so easily resolved. I’d be pretty happy if sitcoms and rom-coms would stop making lame jokes about fat chicks. And it might be nice to see a few less commercials encouraging me to change my life by losing weight (it’s going to take more than a few pounds shed, thanks very much).

Frankly, I don’t need your criticisms or your encouragement (which is just criticism in supportive wrapping paper). Just like any other issue that I may or may not want or need to deal with, that’s my business. I think the reason fat people get looked down on in such a socially-accepted, nonchalant, normative way is because it’s right out there for everyone to see. You can hide your giant consumer debt, but I can’t hide my giant ass (not effectively, at least).

So in that respect, I do agree with Nash. Unless you’re my family doctor or my mom, you can just shut your pie-hole.