Maybe it’s because I’ve been a student pretty much all my life, but Labour Day just feels more like the beginning of the new year to me than Jan. 1. Besides buying a new agenda recently, I also put a post-it on my laptop with my 5 goals for the year without realizing they were, essentially, my new year’s resolutions. And at the risk of making everyone feel like summer is nearly over, here are my goals for the 09-10 year:

1. Get into grad school.
2. Reach my goal weight.
3. Publish my soon-to-be-written novel.
4. Earn my French certificate from the UofT School of Continuing Studies.
5. Save enough money to buy a car.

I admit, I hesitated before publicizing these here. It’s always slightly embarrassing for me to admit certain things, like wanting to write a novel or lose weight. Frankly, I feel a bit silly. But I ultimately decided that would be cowardly. Besides, the pressure that comes with going public might be good for me. Maybe, if you’re really lucky, I’ll eventually post my Bucket List on here, too… Maybe.

You’ve heard about this, right? Canadian Suaad Hagi Mohamud was stranded in Kenya because KLM Airlines and the Canadian Border Service Agency thought she was an impostor ’cause her lips supposedly didn’t match her passport photo? It finally took DNA testing to prove she was who she says she was. But you already know this story.

When stories like this get a lot of media attention and people get really riled up about such blatant injustices, I always wonder about a few things:

1) Why this story? There are so many human rights abuses and just generally crappy stuff happening every second of every day every-freakin’-where, so why this story? Why this woman? How does this story become water-cooler material? I feel almost manipulated when I get upset reading about stuff like this, ’cause I know that shit happens all the time, but I feel particularly upset about this specific woman.

2) What happens now? She’s finally coming home, so is that the end of the story? Will the Canadian Border Service Agency change any of their policies? Will they find a scapegoat, pay some public retribution and wait for the storm to pass? PM Harper said the agency is being asked to provide a full account of their actions. To what end? The pessimist in me wants to cry ‘shenanigans!’ at this PR song-and-dance routine.

3) What’s the attention span for cases like this? I have to admit, when Laura Ling and Euna Lee were detained in North Korea, the situation eventually fell off my radar. That is, until they were released. And I’m sure most people who were outraged at first eventually stopped thinking about it, too. Of course, I remind myself that there are always that group of people – politicians, journalists etc. – who continue to pay attention and take action long after the general public have lost interest in stories like this. It’s a small consolation. I guess it’s not realistic to keep the public outcry going strong for every injustice.

Frankly, I feel rather blue about the whole thing. Maybe there will always be an imbalance between people who look “Canadian” and those who don’t. Could I, as a brown woman from a Muslim family, ever become prime minister of Canada? I’m gonna’ have to say no (but feel free to argue with me on that point).

I always think of this story when I’m on this subject: When I was in grade 5, I had to give a speech, and I chose the subject of holidays. I talked about the origins of Victoria Day and Halloween, and ended the speech by expressing a hope that one day Canada will celebrate all holidays in addition to Christmas and Easter, including Muslim holidays. Afterwards, my teacher said I had done a good job, but explained that in Canada, we celebrate Christmas, and I could celebrate my holidays in “my country.”

I didn’t say anything in response to that because I was confused. Up until that point, I did not realize that Canada wasn’t my country. Unfortunately, that leaves me a little dispossessed. If I don’t belong here, where the hell do I belong? That’s the crux, my friends. What kind of country is this, if its own citizens can’t feel as though they belong?

I was reading a column on ‘recharging your soul’ out in nature, and the section on how to deal with bears made me start thinking about good and bad ways to die.

“10. In grizzly or polar bear territory, carry bear spray (which is a bit like mace). Frankly, the spray is unlikely to stop a 1,000-pound bear hurtling toward you, so experienced hikers respond to a menacing bear by using the spray in one of two ways. The first option is to spray yourself in the face, so you no longer care what the bear does to you. The second option is to spray your best friend beside you, and then run.”

So here is my wish list of ways I DON’T want to die:

I hope that wasn’t too morbid.

On the topic of that column, I’ve been following all the worldly exploits of my friends and “friends” on Facebook. It seems as though everyone’s run off on some adventure or another. I, of course, went to San Diego last month for Comic-Con. After the convention was over, I managed to see a bit of the town – some on my own, most with the help of a friend of mine who lives there.

I’m not a fan of Los Angeles, so I was pleasantly surprised that San Diego was much nicer. The layout of the city was much more pedestrian-friendly and not so hilly, and the architecture was much nicer. I especially liked the highly Mexican-influenced Old Town area, where I saw the play ‘Noises Off.’ Seaport Village was a bit touristy, but the kind of touristy I like, with lots of little shops, old popcorn carts and people flying giant kites.

I also really enjoyed visiting Hotel del Coronado, a very old, very fancy hotel where some of Some Like It Hot was filmed, as well as a very old episode of Baywatch that featured a ghost! (By the way, I totally recognized the hotel from that episode, which I saw years and years ago.)

Since I was in San Diego, which is really close to the Mexican border, I took a quick day trip to Tijuana as well. It only took about 45 minutes on the trolley to get to the border. When I got there, I only had to walk through a tunnel over the highway and through a turnstile to get into Mexico. As soon as I realized I was officially in Tijuana, I had a sudden flash of “should I start being more cautious? Is that guy staring at me?” This eventually wore off. I was instead distracted by all the drug stores and dentists just minutes from the border.

I decided it would be most interesting to just walk around and see where I ended up, although I ended up exactly where my guide book said I should go: La Revo, a long street through downtown Tijuana. I spent most of the day walking by little carts and shops selling the same souvenirs (hammocks, Frido Kahlo mesh bags, Mexican wrestler masks), along with a lot of bars and restaurants (3 tacos for a dollar!). I also saw a lot of guys on corners with mules (or donkeys) dressed up for $1 photo ops. *tear* 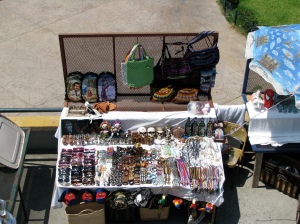 Unfortunately, what they say about store owners calling out to you as you walk by is completely true. It was exhausting. One guy yelled “asalam alaikum” and another called out “one rupee in my store! One rupee!”

Even though the heat and sun were nearly killing me, I later walked toward the cultural hub of the town, but it was really boring.

I eventually stumbled by way back to La Revo, found a store run by a woman who didn’t harass me, bought some stuff from her, and took a cab to the border. I stood in line for about 5 minutes, had a lady quickly scan my passport, said “that’s it?”, passed my bags through security and walked back through the turnstile. And that was Tijuana!

I am committed to returning to Mexico one day, to see the country properly. I think it would be ideal to go during the Day of the Dead festivities. Who’s with me?