Allow me to preface this with the fact that I do, indeed, have a job and a life. Now…

I’m pretty excited about all the TV I plan to watch this summer. And it’s not because there are particularly awesome shows airing during the summer months, but because I plan on watching most of these online while I’m working from home. By the way, for all the naysayers out there: television shows can, and often are, very good quality programming on par with a lot of movies out there. And it’s not a waste of time, as long as I ALSO go outside for fresh air ‘n stuff.

Cake shows on TLC and the Food Network 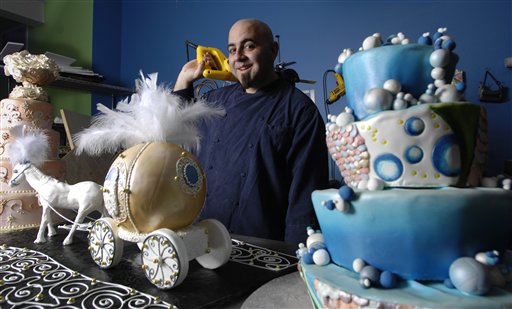 Chef Duff, of Ace of Cakes

One of my greatest joys in life is watching people make truly creative, amazing cakes. Cake Boss on TLC is like Everybody Loves Raymond but set in a bakery and Raymond is a kick-ass pastry chef without a super annoying wife. And, of course, Ace of Cakes on the Food Network is the icing on, well, the cake of cake shows. It’s about a group of friends (give or take a few) who run Charm City Cakes in Boston. They’re much funnier than Cake Boss and, to be fair, make much cooler cakes. Watching these shows makes me want to make “pastry chef” Plan G in my life plan. I don’t know if these are new episodes airing this summer, but who cares? It’s about CAKE!

My new favourite televised obsession is True Blood. The last time this happened to me, I ended up spending a bleary-eyed 20 hours or so watching the first two seasons of Veronica Mars all in a row. Thankfully (for my health and productivity levels) I can only watch one episode a day on Megavideo because of their stupid rules that try to push you to buy a membership. But I digress, True Blood looked like it was going to be a hillbilly (excuse the term) vampire romance. Don’t we have enough of those? (It also sounded like an extrapolation from the episode of Buffy the Vampire Slayer when Buffy can hear people’s thoughts but she can’t read the mind of her vampire boyfriend, but let’s not get into that.) Instead, it was a surprisingly witty, well-made, very engaging show. I already love most of the characters, which is a terrible sign if I’m ever going to leave my bedroom again. Season 2 premieres on June 14, so I better hurry and finish season 1.

I’m also dreadfully behind in watching Dexter and The Sopranos, which I’ve had on my Must Watch list for a very long time. I may actually trot down to the local video store to rent these. THAT’S commitment. The Sopranos is over, I know, so there’s plenty of time for that. But season 4 of Dexter begins on September 27 (that sounds like a familiar date…) so I better get a move on if I’m going to watch a whole season and a half in three months.

Oh, and I may watch Dollhouse since it’s been renewed for a second season (presumably through witchcraft) and because of my loyalty to Joss Whedon and peer pressure. By the way, why isn’t Joss Whedon on Twitter??? Srsly.

I fell in love last summer. Summer lovin’, it happened so fast. It was filled with kicks and twirling and lots of sweating. His name was So You Think You Can Dance. Sadly, I never had feelings for its Canadian counterpart, but you can’t chose who you love, right? Well, season 5 is in full swing this summer, and I’m already hooked. Although I’m still annoyed with how close-minded they are about gender roles in dancing (thanks for the link, carlhiehn.wordpress.com), I love the level of talent both the dancers and the choreographers bring to the floor. I am desperately in love with Tabitha and Napolean (see an awesome routine here), but I think I could see myself loving a new choreographer from last year named Sonya Tayeh (routine here).

Comedy can wait for the fall

Although I’m very behind in watching It’s Always Sunny in Philadelphia, which is HILARIOUS, I may wait until the fall. Half-hour comedies are best saved for school days, when I need something to make me laugh in between studying and classes. So, The Office, 30 Rock and Parks and Recreation: See you in September.

4 thoughts on “The Other Boobs of Summer”

There was an error retrieving images from Instagram. An attempt will be remade in a few minutes.